I am always fascinated by the story of how clergy came to discern and surrender to the call to ministry. Some are more inspiring than others, and this one, written after the ordination of Rev. Janie Koch in the Episcopal Diocese of Oklahoma, was particularly so to me, especially in her explanation of the meaning of the Eucharist. This post originally was published in the newsletter of St. Matthew’s Episcopal Church, Enid, Okla. 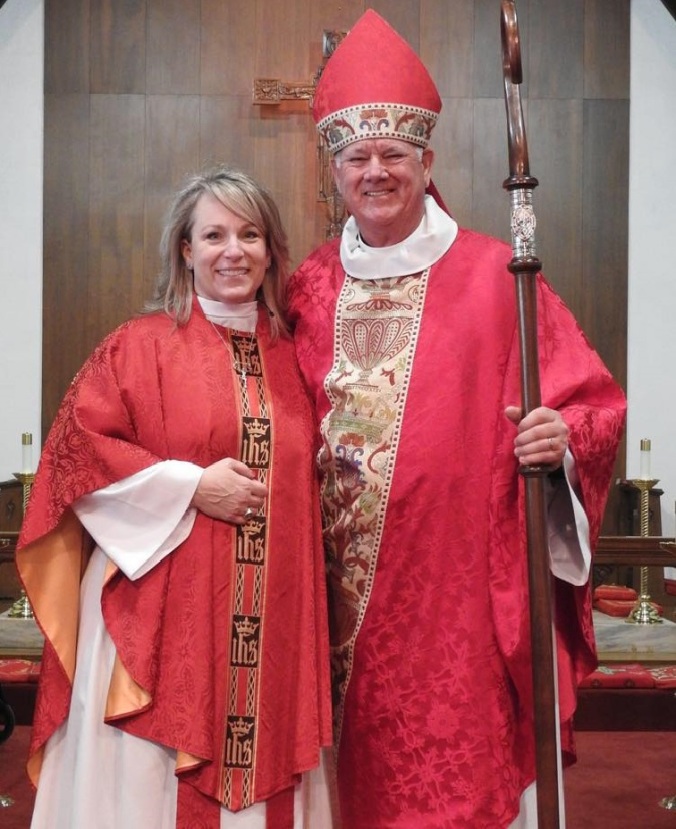 The Rev. Janie Koch was ordained to the priesthood at St. Matthew’s on Sept. 1, and subsequently appointed to serve her curacy in the parish. It was the culmination of a long journey to ordained ministry that started far from the liturgy and canons of the Episcopal Church.

Originally from Iowa Park, Texas, Mother Janie – who prefers to simply be known as Janie within the parish – grew up Southern Baptist. She was heavily influenced by summers at Falls Creek church camp and time with her maternal grandmother, who had planted churches in and regularly attended services in the Pentecostal tradition.

“I became very familiar with the singing, the hymns and that style of very charismatic service, and I loved that,” Janie said.

From the other end of the liturgical spectrum, Janie was influenced by her father’s side of the family, which was Roman Catholic.

“My grandfather had many brothers and sisters, and the women who did not marry took Holy Orders and vowed as nuns,” Janie said, “and somewhere, when I was a young child, I saw pictures in my dad’s mother’s photo albums of these women in the long garb of nuns.”

Those images stuck with Janie, and created a mix of two very different faith traditions in her childhood.

“When I was very young … old people would ask me ‘Janie what do you want to be when you grow up?’ and I would always say, ‘I want to be a nun,’ but I was Baptist and very much trained under the wing of my grandmother,” Janie said.

As Janie grew into adulthood and entered Baylor University, she began to suffer what she felt was an irreconcilable difference between her own worth and the sacrifice of Christ she learned about in the atonement theology of her youth.

“I started to question why we believe what we do, and in my teenage angst I started to wonder what happens when I sin, and I began to feel like I wasn’t good enough for God,” Janie said. “I felt I wasn’t as good as what I was supposed to be, and I felt like I was failing God all the time, and I started to believe that.

“My faith wavered seriously, and I left going to church for about 20 years,” Janie said. “In some ways I was angry with God, because I thought I was a failure and I couldn’t make it right.”

It was her grandmother’s death in 2012, and the example of her life, that ultimately brought Janie back to the church and to a deeper exploration of her faith and God’s grace.

“Sitting in her funeral … I realized at that time how far I felt like I had fallen away from God, and I realized I had nothing of what she had in her life,” Janie said. “I realized that God never left me, but I had left him, and it was in that funeral and standing at her graveside that I realized I needed Jesus. I needed Jesus in a personal way, and I needed to accept him despite who I defined myself to be.

“I started clawing my way back to him, and saturating myself with forgiveness,” Janie said. “I began to realize, it’s not a question of what I do or fail to do: It’s just a question of who I am and who God created me to be. With that came flooding back in this desire to learn and grow … and I wanted to come back into my faith intellectually.”

After 20 years away, she said the Baptist Church “didn’t resonate with me anymore.” A search of several different denominations eventually landed her in an Episcopal Church in her Texas hometown. She said she fell in love with the liturgy and reverence of the Episcopal Church, but also found a sense of mystery she had been missing.

“God is present and God is unknowable,” she said. “The more I believe I know him, the less I know.”

That mystery revealed itself to Janie in the celebration of Eucharist.

“Being able to partake in the Body and Blood of Christ – that tangibility and accessibility of Christ, and kneeling at the rail with other sinners who were just like me – and we need him – is so humbling and beautiful,” she said.

Her desire to grow deeper in her faith led Janie in 2014 to Nashotah House Theological Seminary, an Anglican seminary in the Benedictine tradition in Nashotah, Wis., focused on “the purity of work and the complete surrender of prayer.”

Studying at Nashotah felt like “coming home,” Janie said, but she originally intended it only as an intellectual pursuit – she had no plans to pursue ordination. When professors and fellow students encouraged her to pursue Holy Orders, Janie said she felt a calling, but resisted it – in part because of the traditions of her upbringing.

“I fought it,” Janie said. “I would always say ‘no, no,’ because I still had that Protestant upbringing that women were not to be leaders in the church in that fashion, and it took a while for me to come to a different understanding about that.”

It wasn’t until her last semester of seminary that Janie said she surrendered to the call to ministry. Drawing on the lesson of Abraham and Isaac, she said the decision to accept her call initially was more about being obedient to God than about achieving ordination.

After completing her discernment and graduating from seminary in 2016, Janie was ordained a deacon in February, followed by her ordination to the priesthood on Sept. 1.

Kneeling before the bishop that day and accepting the Sacramental Rite of Ordination, and then celebrating her first Mass, felt like “coming full-circle” in her life, Janie said.

“All those years, I left the church because I felt like I was not worthy,” Janie said. “I still felt that standing at the Mass, but I also felt loved, which was completely different, and … I was overwhelmed in celebrating Mass for the first time.”

She said the most emotional part of the Mass as a new priest was at the fraction – the breaking of the bread over the chalice – and the lessons of atonement from her youth, mixed with the acceptance of grace she found in the Episcopal Church. With tears in her eyes, Janie recalled that moment of breaking the host, of Christ’s recurring sacrifice for us.

“When I stand there and I have the host, I have Christ’s body in my hand, and I’m holding it over the chalice, which is his blood – and I have to break it,” Janie said. “I felt like, ‘I can’t do this, I can’t break this.’ But I have to – there’s this whole inner battle going on, but I have to do this. And I’m the one who had to break him. And he had to be broken for everybody. It’s very powerful.”

Janie said she looks forward to sharing that powerful message of the Mass with the people of St. Matthew’s during her curacy – a period of service under the instruction of Fr. John Toles, during which she still will serve full-time as an English teacher at Oklahoma Bible Academy.

“I want to learn to help people grow in their faith, while also helping them to grow together,” Janie said, “building up the Body Christ and also building up the business of the church, and ultimately learning how to manage God’s home.”